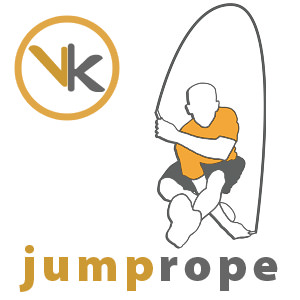 The Rope Masters videoKast is your source for the best in rope skipping instruction. Join World Champion Peter Nestler as he takes you around the world to learn from some of the best jumpers in the sport. Each episode features 2 skills. A jv skill – geared toward those just getting into jumping or for those looking to add some variety to their workout, and a varsity skill – designed to challenge the more advanced jumper. All aspects of rope skipping will be covered so whether you’re looking to Double Dutch, Chinese Wheel, or just learn the basics of jumping by yourself, this show will cover it all.

All episodes are available at Jump Rope Secrets.This site is streaming based and is a collection of every video we have ever produced on Jump Rope.

This episode of the videoKast was filmed while on location in South Korea. Join Peter as he teaches 2 tricks that he picked up while editing the new DVD Frozen. Neither trick has a proper name (at least we don't know what they are), but don't let that stop you from learning these great single rope skills. The jv is a different approach to reversing from backward to forward. The varsity is a variation on a full turn that looks really neat.

In this episode of the Rope Masters videoKast, Peter Nestler teaches 2 single rope skills. The jv skill will teach you how to catch the rope with your feet and jump. This skill is useful in partner routines and is a good one to master. The varsity skill is one that Peter picked up while teaching in Kenya. It is an outside leg-wrap that looks very cool, but does take some practice to get down.

In this podcast tutorial on jump rope, Peter Nestler teaches how to do a backward EB cross, but with a twist. Instead of letting the rope go over your head, you'll learn how to continuously jump without the usual pause that you wait for when the rope goes over your head. This trick is then added to a quad to create the varsity skill.

In this video podcast on rope skipping, Peter teaches two single rope skills. For the jv you'll learn how to do the 360 Leg Wrap to Cross that shows a different way of combining wraps with turns for a cool looking trick. The varsity is a new rope release skill called the Anaconda. It's an intricate rope release that will challenge you as you learn it, but looks very cool when mastered.

In this podcast tutorial on rope skipping, Alicia joins Peter in demoing how to do a cross in 2-Person 1-Rope for the jv. The varsity is the handle switch in Chinese 2-Wheel.

After a 2 month tour in Australia/New Zealand, Peter is back with another episode of the videoKast. In this episode, you'll learn 2 skills that Peter learned while on his tour. The jv is a 180 Wrap Step-Through that he picked up from Pieter Himpe (belgium) and the varsity is a reverse arm toad/tj that he learned from current world champion, Luke Boon.

In this videoKast tribute to Michael Jackson, Peter teaches the Moonwalk. Jackson was always known for being an incredible performer and dancer so we've dedicated this episode to teaching some dance skills that can be done in rope skipping. The jv is the grapevine and the varsity is Michael's trademark move, the Moonwalk.

In this podcast on rope skipping, Peter Nestler teaches some more single rope skills. Learn the elephant cross for the jv, a double arm cross under one leg, and the eb toad wrap into a mamba for the varsity.

Rope wraps are the name of the game this episode. Peter teaches a way to combine a rope wrap with the basic criss cross for the jv. The varsity is a new skill Peter recently developed that shows how you can combine multiple unders, turns and a rope wrap to create neat looking combinations.

In this episode, you'll learn 2 single rope skills. Peter teaches the step through for the jv and the varsity is one that Peter made up called the Backward Awesome Mamba. It combines the Awesome Annie with a backward rope release.

We were very pleased to have the Rope Masters at Sheridan for an assembly this afternoon. Not only were they engaging, the students were engaged, but they delivered a very clear message on the importance of exercise and the importance of physical fitness, mental fitness and the time that students need to do those activities. The kids were involved, engaged, they had active participation and we were thrilled to have the Rope Masters here at Sheridan. Again we thank you very much for the time you put into making this very pertinent to our student body.