By: Peter Nestler
In: Show Experiences

After my adventures in Egypt (part 1 | part 2), I got to fly to San Francisco for a day then turned around and flew to Italy. It was a long time sitting on airplanes, but that’s the performance life. Thankfully I have some friends that live in Caserta, Italy so we had a place to stay for our 3 weeks of adventure there.

Upon arrival in Naples, I really didn’t have much clue what my jump rope schedule was going to be. I found out very quickly how laissez-faire things are for the Italians (excuse my french :-)).  If we wanted groceries, you had to buy whenever you saw that the market was open. They might be open later, they might decide to take the rest of the day off. It was also very common for stores to be closed between 1 & 4 for a “siesta”. Culturally, they operate on the Italian schedule.

So that was the mentality that I walked into. They had a couple schools interested in a show, but when that would be was an open question. This was also my wife’s first time to Italy and she wanted to see some stuff ancient stuff.  We spent our first couple days trying to figure out what days we had free and when we would be performing. Ironically, a great use of our time 😉 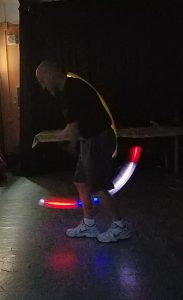 Eventually we got everything sorted for a couple jump rope shows at local High Schools. I’ve found it humorous how in the USA, I generally perform at elementary and middle schools. When I am scheduled to perform in other countries, I often get booked at high school and college levels. I know part of this has to do with older students having a better grasp on English, but hardly any of the students I performed for in Italy understood more than a couple words I said.

2 hours is a really long show

After years of performing, I have found that 45 minutes is about perfect for a show. When I was told that my first show was 90 minutes and my second show was 2 hours, I really didn’t know what to think. I did know that my show was going to be longer than normal due to hardly any of the students speaking English. 2 hours? Probably not that long. My translator was quite unworried about my concerns. We can take a coffee break if we need to. Ahh, the Italian mindset.

The first high school I performed at was 90% male. I had no problems with getting volunteer who wanted to try jumping. However, at the end of the show it was almost like pulling teeth to get any questions out of them. The only exception was an autistic student who had a plethora of questions that never felt like I was answering thoroughly enough. 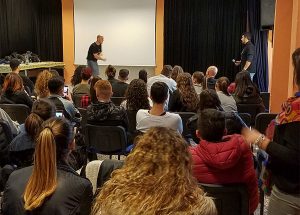 The second high school I visited was 90% female and I had the opposite problem with them. No one wanted to volunteer during the show. If you’re the type that likes to make lemonade out of lemons then this would be a great time to mention that getting enough volunteers did take up a longer than necessary chunk of the 2 hour show time. At the end of the show we did get a lot of questions. This just goes to show how every show has it’s own unique set of challenges.

We ended up doing a couple more jump rope performances during the trip. One of my friends works on the US Naval support base in the area. He was able to setup a program for some of the high school students there. That was a fun group since he wanted me to also have them do some active warmup exercises. I ran them through some of the Guinness World Records that I hold. It’s always an experience to watch people try awkward movements the first time, especially when you have them racing each other.

Having a good translator is so important!

I don’t know what I would have done without Giacomo. He was an awesome translator and made the jump rope show work! I’ve had a good translators and bad ones. One of the funny problems we run into is when you have someone who has never seen you perform. They often stand and watch the show and forget to translate. This only happened a couple times.

It was an awesome trip and we can’t wait to go back! Italy has so much to offer and we are really hoping that we can get into more schools. We want to inspire students to get active and dream big. Culturally, Italians don’t feed dreams. They don’t think outside of traditional jobs and careers. I love seeing people start to understand that there is so much more out there if you’re willing to jump outside the box 🙂

2017-12-11
Previous Post: Egyptian Revival – The Return of the 6 Foot Balloon
Next Post: I just drove all over Australia because school was out

Peter was a breath of fresh air when he presented at our student council workshop. His unique ability and talent was the perfect way to grab our students attention. They were amazed at his skills. Peter let the students know how important prioritizing is in a persons life. His youthfulness also helped to relate to the students. Peter helped kick off a great day for us. The students especially liked his question and answer session. He is highly recommended if you are looking for a speaker who will connect with your students.