Hurghada Jump Rope Shows and a Lesson in Baggage Problems

This year has been going by much faster than I would have thought. I am staying very busy, even though I am doing less jump rope shows than normal. Why less? Well, that will be saved for another day. I am currently between international trips since I just returned from doing some jump rope shows in Hurghada, Egypt and will be leaving for Koror, Palau on Friday (my first time to this island nation). I have to say that I dislike baggage issues immensely…here’s what happened.

I started out on a Monday morning in Milwaukee, WI after doing a jump rope show there on Sunday afternoon at a an Upward award event. I got to the airport for my 7:03 AM flight and there was a bit of snow, but nothing impressive (unless you live on an island nation where the mere sight of snow would give you a heart attack). The 7AM flight was boarding when I got to my gate and oddly enough, our plane was missing…not good. We were told that it had been in the hangar all night and the ground crew was very slowly making their way over with our jet. We finally boarded around 7:30 and then we proceeded to sit on the plane for 7 hours as they closed, then opened the airport multiple times. I still am flabbergasted how ill prepared they were for the snow. Needless to say, our flight was very late. 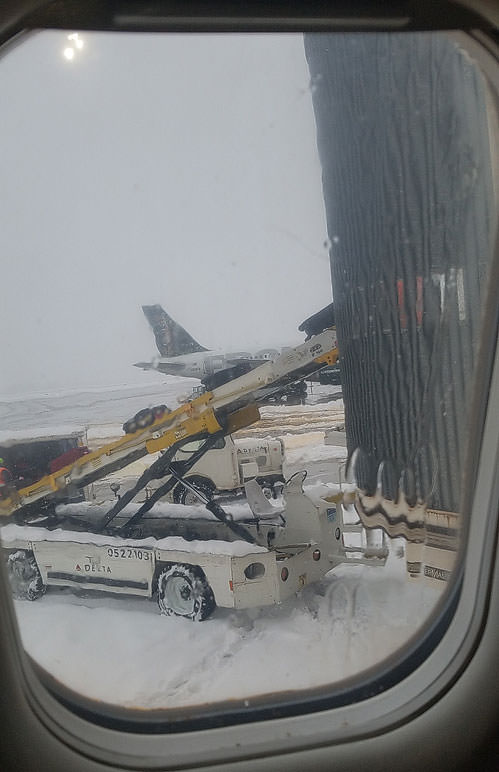 I finally made it to Detroit and had missed my connection to Indy where I was supposed to perform a jump rope assembly program at a school there. I sadly missed the show and hopefully we are able to get it rescheduled. Anyway, since I was supposed to pick up my baggage in Indy and check it back in for my flight to Cairo, I had a problem, they were able to put me on a direct flight to Paris from Detroit, but my baggage did not make it. In fact, they ended up taking 5 days to get my baggage to me in Egypt. Not good.

Thankfully I have learned from years of doing my jump rope programs that you never fly without the bare necessities in your carry on luggage (there’s a certain bear I probably need to thank for that). I always carry my jump ropes, glow rope, microphone and a pair of shorts and a shirt I can perform in. This was one of those trips I’m glad I learned that lesson. If there was any way for me to carry on my unicycle you can bet that I would have had that as well. Sadly, it was in my luggage. When I finally got to Cairo I got a good night’s sleep before taking the 6+ hour drive to Hurghada which is on the coast of the Red Sea. The drive along the water was quite scenic until the sun set, then it was just darkness and lots of sand. Sami, the hospitality director for the venue I perform with, was kind enough to let me borrow some of his shirts and swimming trunks so I didn’t have to smell too bad by wearing the same clothes every day.

I was scheduled to perform for 3 nights in a row for the festival. Normally I can easily break my show down into various parts so that I don’t have to repeat any jump rope stuff over the course of the trip. With my bags missing my plans were not going to go over so well. The big issue was that we had no idea when the bags were going to come. My wife was talking to the airline back in the states and they told her it would be there in an expedited fashion, of which my definition of that word meant they would actually come the next day. I did my first jump rope demo as I normally would hoping that I would have my unicycle the following day. Thankfully the organizer adjusted the schedule the second night so that I had a shorter performance then a special show for the kids tent.

The third night of the festival was quite a unique challenge which had nothing to do with baggage. I got to experience a sand storm…and jump rope in it. We had some time during the day so we went scuba diving in the red sea (totally awesome). I took a quick shower after returning from the boat (which was a very lacking shower of which I had to sit on the floor and sprinkle water in small batches for it do anything). I looked outside and there was a weird tone to the color in the sky. I opened the door and could see the sand blowing everywhere. I was curious if they would cancel the event, but the Egyptians are a hardy bunch (they lived through plagues of flies, frogs, etc so they have certainly proven their mettle). The show was on and I got to perform a jump rope show in a sand storm…definitely my first.

The following day we made the drive back up to Cairo and my baggage was sitting in a small office with some delivery company. Oddly enough, they only had my name on one of my bags so if I hadn’t shown up to collect them, there’s no telling what would have happened to the rest. I have to say that I was very disappointed in Delta/Air France for how long this took. Thankfully I was able to make it, but it sure is easier to perform when you have all your gear. If you take nothing else from this…always pack the essentials in your carry on. Unless it’s a laptop or some other electronic device and you’re flying back from Egypt since that’s not allowed for the moment. The never ending fun of travel. Learning to be flexible is the most important thing you can do. I’m excited to visit Palau next week and can’t wait to share some jump roping in a brand new country for me!

2017-03-28
Previous Post: Jump Rope in the Middle East
Next Post: The Low Down on What’s Going on with me and my Back Pain (Surgery)

We had about 400-500 people in attendance. We had a very good reception from the crowd, good audience participation. The k-8 audience was probably a great audience as far as age level. Very appropriate for them with a good message about staying fit and practice and put some work into something. So both the message and the performance was well received by the 5 elementary schools that showed up. And the students received it well. I would recommend him highly to any k-8 assembly in the future.